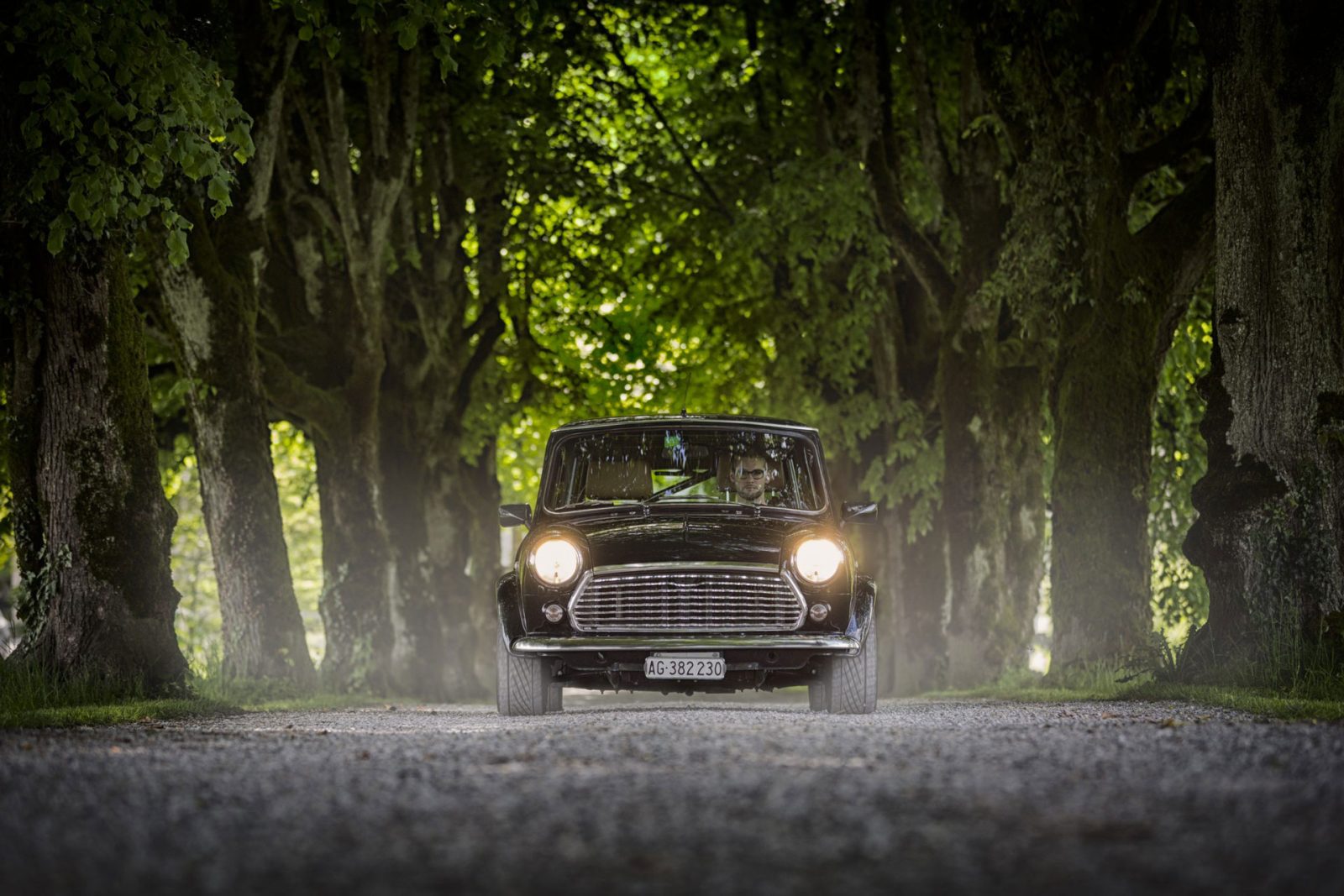 The Meanie: The wolf in sheep's clothing

The original Mini has been brought back to life, but now the legendary British icon is showing all the hallmarks of a full-blooded sports car. It answers to the name “Meanie” and has Swiss credentials!

While the original Mini stands there looking all sweet and innocent, it’s a classic case of British understatement because there’s a big heart beating in this little bundle of joy.

Sweet and innocent? Nothing of the sort!

Where you would normally find the back seat, a turbo-charged two-litre mid-engine gets down to business, packing a mean 220 hp on the rear axle (340 N-m of torque). With this kind of power, getting from zero to 100 km/h in less than four seconds is a breeze – and the speedometer needle doesn’t stop until it hits 200 km/h. The Meanie is a mean machine that lives up to its new name and is perfectly capable of giving a fully-fledged sports car a run for its money.

Five of these cars will be built at Emil Frey Classics AG. A legally compliant prototype is already hitting the tarmac, with a road licence for the EU that covers Switzerland as well. And that was anything but a foregone conclusion, because there were enormous hurdles to obtain EU approval for small series production. 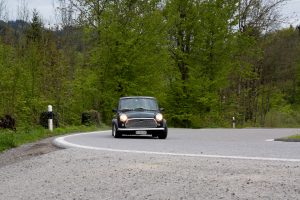 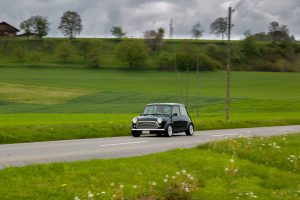 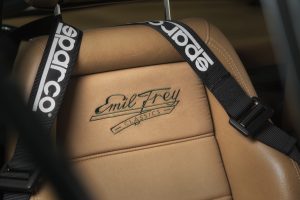 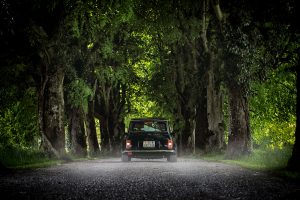 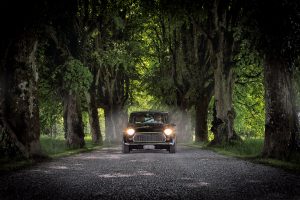 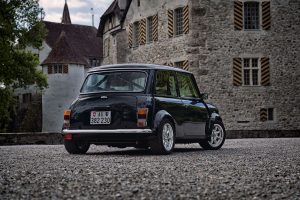 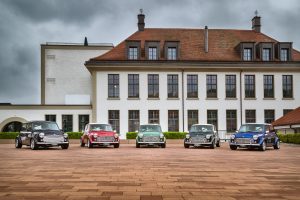 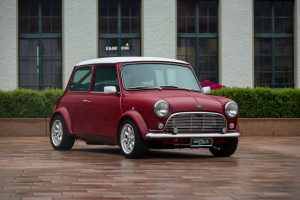 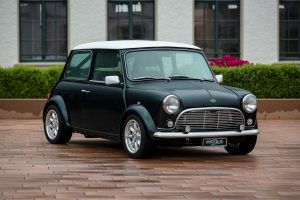 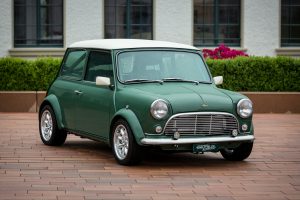 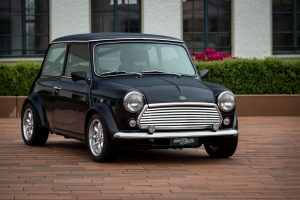 A stroke of good fortune

It sounds like a fairy tale: Once upon a time, in 2012, a young mechanical engineering student named Raffael Heierli was writing his bachelor’s thesis at the University of Applied Sciences in Rapperswil, Switzerland. The paper had a rather unwieldy title, “Structural analysis for the design of a mid-engine sports car with a classic car look, licensable for road use and suitable for small-scale production”. His vehicle of choice was a late 1990s Mini model with muscular wheel arches. The examiners were duly impressed, and our engineering student was awarded his degree.

Support from a long-standing Mini importer

A job well done? Yes, except that Heierli actually dreamed of building the car that as yet only existed on paper. Early on, he had written a letter to entrepreneur Walter Frey asking for his support. The Emil Frey Group had imported the Mini for years, after all, and the boss himself had raced the Mini Cooper S in the past.

Even so, Heierli didn’t hold out much hope. But two days later, Frey’s reply landed on his desk. The student was invited to present his project including the budget and got the go-ahead! And the Zurich-based entrepreneur offered to take on the cost of the materials.

At the end of 2013, the small team ensconced itself in a backyard workshop. Some 17 weeks and a thousand working hours later, the prototype – with British Racing Green bodywork – was ready to go. The Meanie’s back seat and boot were replaced by a mid-mounted engine and a specially designed gas exhaust system.

Founded in 1975 in Witney, Oxfordshire, BMH had at that time acquired all the series production tools when the Mini ceased production in 2000, after its amazing run of 5,387,862 models. The company also produces new body shells for classic cars, such as the MG MGB and Triumph TR6, and exports them all over the world.

From the outside, as much a Mini as ever

The exterior of the Meanie was designed to be indistinguishable from the original Mini. Radiator grille, lights, bumper, wing mirrors, windscreens and wipers were supplied as new/old original parts. But under the stylish bodywork, just about everything else was new. Alongside the power turbo-charged engine, the parts – sourced from all over the world or custom built –  included: a tubular frame in chrome molybdenum steel to support the heritage body shell, an aluminium four-piston brake assembly with perforated, internally ventilated 260 mm disc brakes to ensure proper deceleration – and two bucket seats with racing harnesses, a cooling system and an extremely short gas exhaust system.

No back seat or boot

Some 17 weeks and a thousand working hours later, the prototype was ready to hit the road. It was now a two-seater in which the boot and back seat had been replaced by a high-torque mid-mounted engine designed to propel the 847 kg lightweight to new sporting heights.

Soon it came time for the Meanie to prove itself on everyday roads. Raffael Heierli stuffed it with measuring instruments and started a comprehensive programme of tests, racking up 40,000 km in the process – equivalent to a round-the-world trip. The sports car was put through its paces on motorways and racetracks, over mountain passes and in stop-and-go city traffic. It passed all the tests to the complete satisfaction of its builders. Not only did the Meanie prove to be a little racing thoroughbred, but it was also perfectly well-behaved in everyday traffic i.e. civilised, safe and clean. One of the first test drivers was Walter Frey, who was full of praise for the Meanie’s handling on the road.

In the interim, measurements of as much as 270 hp and 460 N-m were recorded, while die-hard professional racing drivers managed to push the speed up to 245 km/h. As Heierli felt that was too much of a good thing, the horsepower was limited to 220 and the maximum speed electronically restricted to 200 km/h. Any higher, the short wheelbase would make our diminutive sporting star hard to control.

An official one-off inspection or special approval would have sufficed to allow the Meanie onto public roads, but success fueled ambition – and one Meanie simply wasn’t enough. Entrepreneur Walter Frey offered his help with the next step: the production of a limited edition, licenced as a new car in all of Europe. To this end, Safenwil-based Emil Frey Classics AG and Roos Engineering Ltd. were brought into the project as manufacturers.

It was determined that trying to certify the car in Switzerland, up to the technical standards of the VTS (national driver and vehicle licensing agency), would have been too expensive and probably pointless given the unrealistic requirements. Instead, the manufacturers decided to apply for a road licence and small series approval in the EU.

The undertaking turned out to be a real Herculean task and dragged out over a period of 18 months. “I ploughed through 17,000 pages of regulations,” says Raffael Heierli. He produced a hefty pile of documents describing the Meanie and its production process, right down to the smallest detail. This necessitated a large number of tests to satisfy gas exhaust, noise and safety regulations. For the crash test, a demolition-ready Mini was converted and driven into a wall. More elaborate tests on electromagnetic compatibility- and evaporative emissions were also required.

“We had to find new solutions for some components,” explains Heierli. But finally, the desired outcome was achieved. In the autumn of 2016, the proud Meanie creators obtained both the road licence for the EU – which automatically applies to Switzerland as well – and approval for small series production.

The Meanie: A limited edition of five

We would be happy to answer any questions.